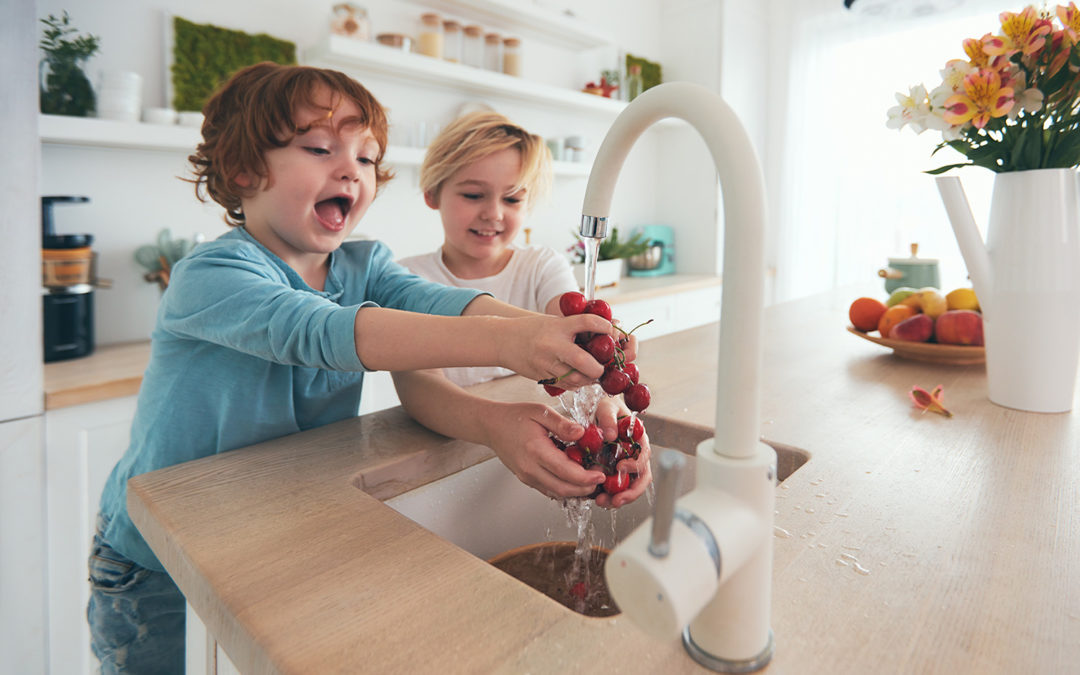 Potassium is NO more effective at softening water than sodium. Potassium is NOT better. Potassium & sodium are soft salts & are used in the ion exchange process in softening water. Just like sodium, potassium, or any other minerals such as lime & calcium, it does not absorb into the skin therefore it has zero health effects. If a person is consuming soft water and is sodium sensitive, potassium might be considered as an alternative. Also, in most cases a home that is pre-plumbed for a water softener will have the kitchen cold & ice-maker bypassed so as to not drink softened water, mostly because of taste.

Many people use reverse osmosis to purify their drinking water, so regardless if sodium, potassium or calcium is present in the water it will make no difference because the reverse osmosis removes all of the salts and minerals. In rare situations I recommend potassium for those who have a skin sensitivity to sodium which might be 1 in a 1,000 people.

There are no health benefits to potassium water softeners

If a person is using potassium in a water softener with the idea of consuming that water for health benefits they are poorly mistaken. I’ve had several customers who had the same belief and have had health problems for having high levels of potassium and heart issues from levels of potassium that were too high.

Besides, it’s much cheaper to get your potassium from either a potassium pill or a banana then it is to pay $25 or $30 for a bag of potassium if your intent is to consume it. Potassium is generally marketed by water treatment companies so they can distinguish themselves from water softeners that are far less expensive. Sodium or potassium can be used in any water softener.

From the World Health Organization:

Here is information from the World health organization (WHO) in regards to potassium added to drinking water.

Guidance on potassium from water softeners

Although potassium may cause some health effects in susceptible individuals, potassium intake from drinking water is well below the level at which adverse health effects may occur. Health concerns would be related to the consumption of drinking water treated by water softeners using potassium chloride, affecting only individuals with kidney dysfunction or taking medications that interfere with normal potassium-dependent functions in the body.

This is not a concern for the general population. However, increased exposure to potassium could result in significant health effects in people with kidney disease or other conditions, such as heart disease, coronary artery disease, hypertension, diabetes, and who are taking medication that interfere with normal body potassium handling.

Potassium plays a critical role in many vital cell functions, such as metabolism, growth, repair and volume regulation, as well as in the electric properties of the cell. Adverse health effects from exposure to potassium in drinking water are unlikely in healthy individuals. Higher than normal potassium concentrations in the blood (hyperkalemia) and ensuing health effects are unlikely because potassium is rapidly excreted in the absence of pre-existing kidney damage.

However, potassium levels in drinking water from water softeners using potassium chloride can be very high, and may significantly increase an individual’s intake of potassium that could cause hyperkalemia in susceptible individuals. As a consequence, people with certain medical conditions (and medications) that potentially cause hyperkalemia should avoid the consumption of water (for drinking or cooking) from water softeners using potassium chloride.

Potassium is a natural and essential element in plants and animals, and humans are exposed to it primarily through food, at levels unlikely to pose health risks.

In Canada, the total average intake of potassium from all sources is approximately 3.1 g/day for a 70 kg adult, well below the Adequate Intake set at 4.7 g/day for adults.

Municipally treated drinking water may contain small concentrations of potassium. The use of a water softeners using potassium chloride can significantly increase the levels of potassium in drinking water, even at water hardness levels considered to be acceptable.

In cases where potassium is added to water through the use of a water softener, the recommended strategy is to limit or prevent the addition of potassium to water that will be ingested. This can be done by having a proportion of the water bypass the softener altogether.

Although removal technologies are available to remove potassium, they are generally more expensive and redundant when combined with the softening treatment.